The Man Who Killed Hitler and then The Bigfoot 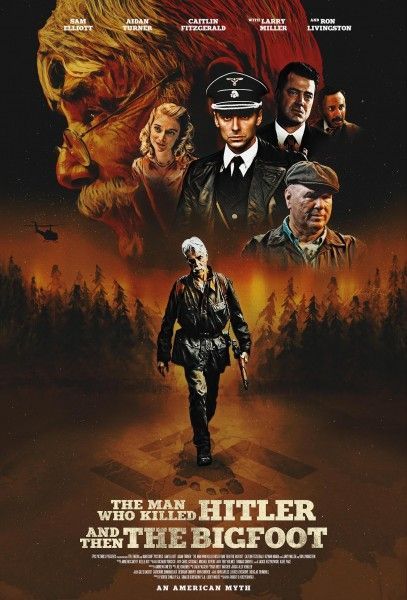 The year is 1987. Calvin Barr (a too-great-for-words Sam Elliott) is not a violent man. But he is more than capable of violence if sufficiently provoked. What many don’t realize about the thoughtful, elderly bloke regularly seen at the neighbourhood tavern is that he’s a legendary WW2 veteran who many years ago assassinated Adolf Hitler, an incredible secret that he’s frustratingly unable to share. One day, just as he’s coming to terms with rounding out his life, Calvin gets a visit from the FBI and the RCMP. They know what he’s done, and what he can be capable of. They have a mission for him. After discovering that it harbours a disease capable of eradicating humanity… they need him to take out Bigfoot.

A wondrous feature debut from writer/director Robert D. Krzykowski, featuring visual effects by celebrated two-time Academy Award Winner Douglas Trumbull (2001: A SPACE ODYSSEY, BLADE RUNNER), who also co-produced alongside the great John Sayles and Lucky McKee, and a supporting cast that includes Aidan Turner (THE HOBBIT trilogy), Caitlin FitzGerald (ALWAYS SHINE), Ron Livingston (THE CONJURING), Sean Bridgers (ROOM) and Rizwan Manji (PATERSON), this is one special film. A fantastical discourse on the melancholia of old age and a singular blast of entertaining wit, THE MAN WHO KILLED HITLER AND THEN THE BIGFOOT bubbles with imagination and poignancy. It’s a work that stands as staunchly alone as the weather-beaten hero at its core. It will bowl you over like a forgotten beast deep in the Northern wilderness. – Mitch Davis