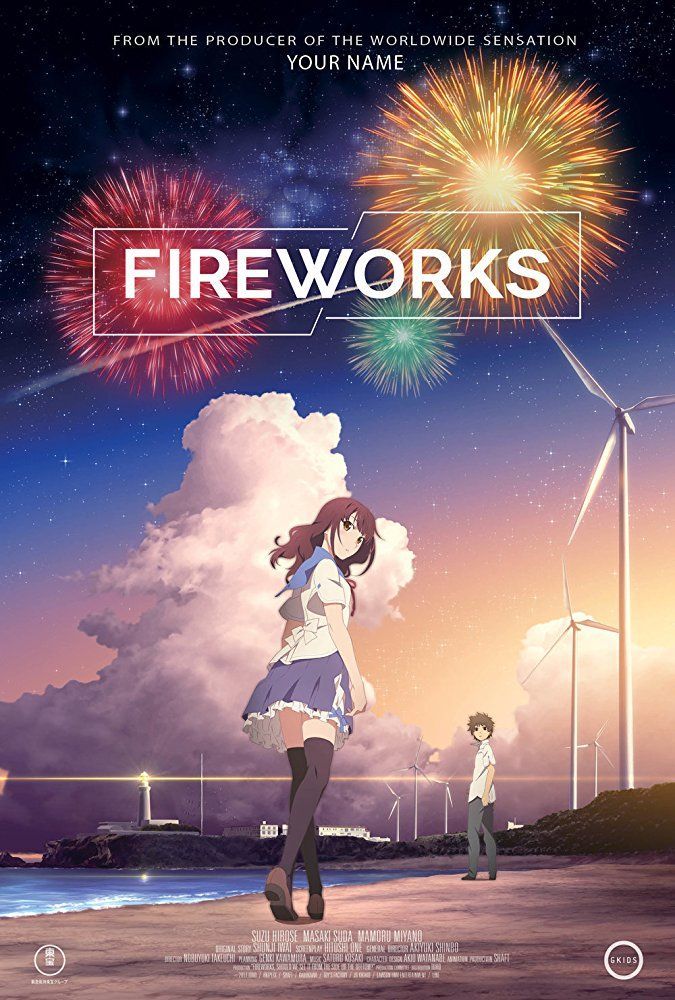 “Sparkles with strangeness… an adventure in counter-factual romance”

"...3-D CGI fantasy worlds, with pulsing surreal imagery reminiscent of Salvador Dali, are like nothing created by Shinkai or his illustrious senpai (senior), Hayao Miyazaki."

"...the animation is undeniably beautiful."


A beautiful day in the little Japanese town of Moshimo carries the promise of the fireworks show that will take place after sunset. High-school pals Norimichi and Yusuke are looking forward to it enthusiastically, though their thoughts are also occupied with their pretty, withdrawn classmate Nazuna. For her part, Nazuna is distraught about her mother’s impending remarriage, and the prospect of relocating. When Yusuke wins a swimming race, Nazuna taps him to be her date for the fireworks that evening – but it’s Norimichi she’s sooner run away from home with. The young pair’s plans are thwarted by Nazuna’s mother. An impulsive and seemingly inconsequential gesture by Norimichi a moment later sets in motion a wild disruption in the flow of time itself – and in the course of star-crossed young love.

Following such keystone releases as Mamoru Hosoda's THE BOY AND THE BEAST, and of course Makoto Shinkai’s mega-successful YOUR NAME, celebrated producer Genki Kawamura has breathed life into yet another essential work of the current anime renaissance. Adapted from the mid-’90s live-action TV series created by Shunji Iwai (ALL ABOUT LILY CHOU-CHOU), which has retained a place in so many Japanese hearts in the decades since, FIREWORKS draws its audience into a keenly rendered drama of adolescent romance and then, at just the right moment, gives the matter a fantastical, what-if twist. Where do things go from there? Down many paths, in fact, but it all leads to a marvelous, mind-bending climax – and to the conclusion that the anime genre, with its expanding emotional scope yet no loss of technical excellence, is in the capable hands of a worthy new generation of creators. – Rupert Bottenberg