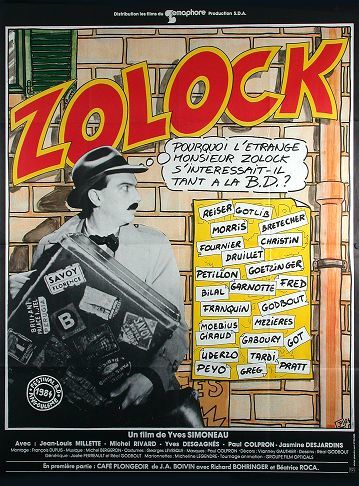 A strange, eccentric millionaire with dubious intentions (a very cartoonish Jean-Louis Millette, faithful Simoneau regular) hires a private eye (Michel Rivard) to investigate the comic-book industry and its effect on popular culture. The detective's inquiries take us deep inside the workshops of select French masters of the comic-book craft in all its forms, where interviews abound with celebrated creators, including Enki Bilal, Claire Bretécher, Philippe Druillet, Franquin, Fred, Jean Giraud, Gotlib, Yves Got, Annie Gotzinger, Greg, Peyo, Hugo Pratt, Reiser, Jacques Tardi and Albert Uderzo. A little closer to home, the film is also interested in the works of Garnotte, Serge Gaboury and Réal Godbout. We are also privy to techniques employed by certain giants of the industry, as M. Zolock hopes to compile enough data to formulate a plan to dominate the world.

Éléphant: mémoire du cinéma québécois is proud to celebrate its 10th anniversary with the premiere of its restoration of the far-too-long-lost, if not completely forgotten, gem, POURQUOI L'ÉTRANGE MONSIEUR ZOLOCK S'INTÉRESSAIT-IL TANT À LA BANDE DESSINÉE? This hybrid work finds its own way to blur the lines between documentary, fiction and a loving ode to the arts. Yves Simoneau has always been much influenced by comics, DANS LE VENTRE DU DRAGON perhaps being the most striking example. Both the film and its marketing screamed cinematic comic book. With ZOLOCK, Simoneau pushes the boundaries of audacity by even having certain comic-book characters literally pierce the screen, including Philémon. We are very proud to join Éléphant for the presentation of a freshly restored copy of this magnificent exercise in cinematic liberties directed by Yves Simoneau, to whom we will be awarding the Denis-Héroux prize before the screening to highlight his exceptional contribution to the development to both genre and Quebec cinema. Translation: Guillaume Desbiens