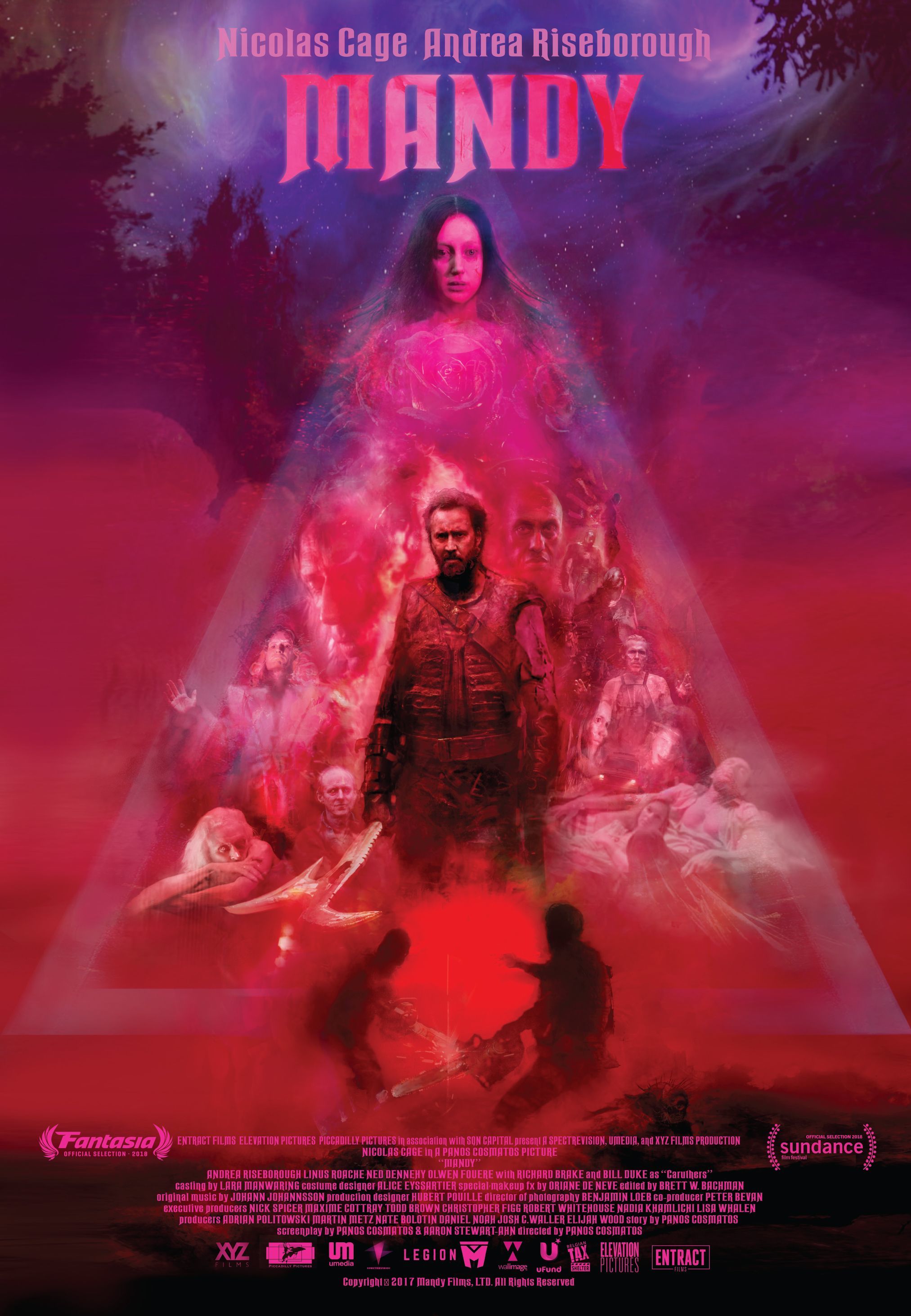 “An Orphic journey into Hell itself… One of the weirdest, wildest, and bloodiest films in ages”

“As if its sole goal was to take the heavyweight title of Nicolas Cage's Craziest Movie Ever, MANDY exhibits what Shakespeare called ‘vaulting ambition’ in producing the nuttiest ways for Cage to get into one phantasmagorical showdown after the next”

“As if its sole goal was to take the heavyweight title of Nicolas Cage's Craziest Movie Ever, MANDY exhibits what Shakespeare called ‘vaulting ambition’ in producing the nuttiest ways for Cage to get into one phantasmagorical showdown after the next” – Nick Allen, ROGER EBERT.COM

The peaceful existence of Red Miller (Nicolas Cage) in the Shadow Mountains of 1983 is burned to the ground when a deranged religious sect fixates on Mandy (Andrea Riseborough), the love of his life and, as is soon made very evident, a significant grounding force in his universe. Things deteriorate into a tranced-out nightmare of insect venom, hard drugs and broken-minded delirium as Red journeys into hell in order to avenge the woman he once lived for. Blood will flow in rivers. Worlds will collapse unto themselves.

A pounding, bleeding act of cinema, psychedelic and unwavering in its doom metal forward march, MANDY is the spectacularly singular sophomore feature of Panos Cosmatos following 2010’s BEYOND THE BLACK RAINBOW. It’s a surreal genre film enigma twisted into a fist that demands you engage with it on its own gonzo terms. It’s also an astoundingly good time that doesn't look, sound or feel like anything you've ever encountered. At the centre of the bloodstorm is an utterly driven performance by Cage that at times makes Volume 11 seem mid-dial, yet is grounded in devastation and internalized rage. He prowls from setpiece to setpiece, each stranger than the last, maintaining a gut-wrenching emotional core that reminds you how truly great a performer he is. As crazy as things get, there’s a profound sadness in MANDY that resonates into its own kind of poetry. Otherworldly layers are conjured by a shredding experimental electronic score from the late Jóhann Jóhannsson, that works hypnotically with the film’s pacing and imagery to create a dreamy mood of near-death intoxication. All this plus imaginative prosthetic effects from Astron 6, a gloriously eccentric sense of humour, and a cast that includes Linus Roache, Richard Brake and Bill Duke (!), makes MANDY a cinematic power-chord for the ages and a rather ultimate Closing Film for Fantasia’s 22nd edition. See you in purgatory! – Mitch Davis