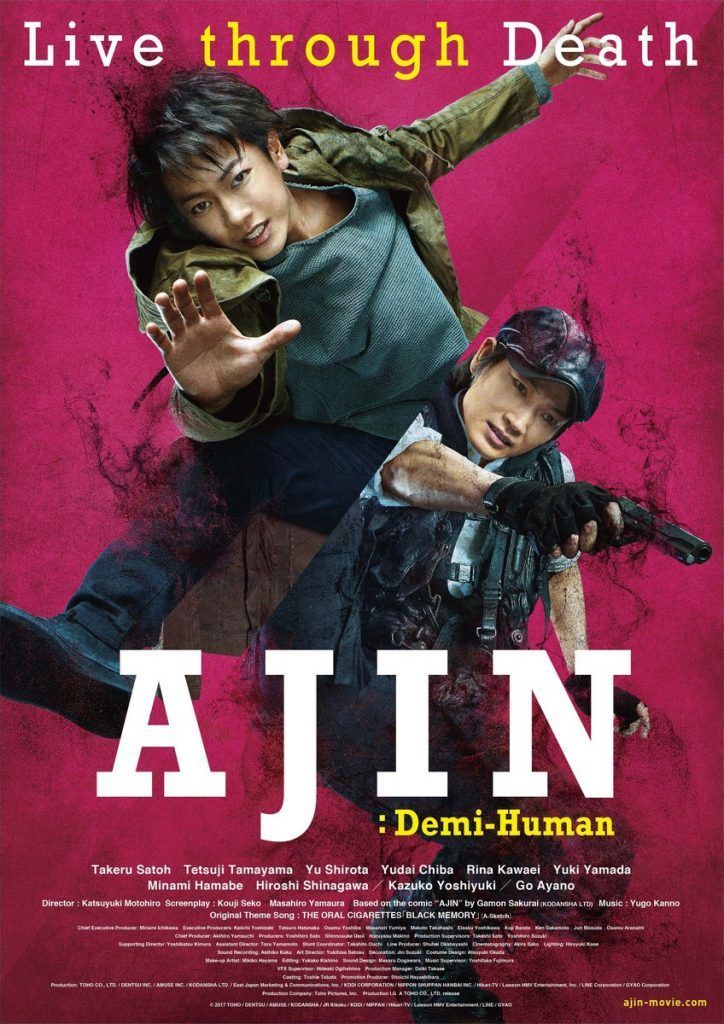 When we first meet him, Kei Nagai (RUROUNI KENSHIN's Takeru Satoh) is dead. Or dies, to be more specific, but where this would be the end of one movie it's actually the beginning of AJIN: DEMI-HUMAN, which very quickly brings Kai back to life where he discovers he is an Ajin, a demon-controlled demi-human whose body has the ability to heal instantly, and to whom death is not a possibility. Kei suddenly finds himself torn between two different worlds — the government agencies who want to study and control the Ajins and then anti-human, pro-Ajin terrorist Sato (Go Ayano), who considers the Ajin the next form of evolution and seeks to make humanity extinct. With the authorities on his tail and demi-humans out to make him theirs, Kei struggles to save his own humanity, while saving the rest of us before it's too late.

AJIN: DEMI-HUMAN marks the first live-action adaptation of Gamon Sakurai's popular manga series (later an animated trilogy), and to answer your question, yes, it's awesome. More so than that, it's a solidly faithful adaptation that delivers on the wild action but doesn't forget to put its likeable characters at the forefront and give them something to fight for. Director Katsuyuki Motohiro (BAYSIDE SHAKEDOWN) infuses AJIN: DEMI-HUMAN with plenty of zip and a snazzy visual style with fine SFX. Action fans will find much to like (a LOT of people get killed again and again and, boy, is it fun!) and fans of the manga and anime version will come out smiling. Even if you've never heard of AJIN before you're going to find yourself having one of the most crazy fun times at Fantasia 2018. - Matthew Kiernan